After my last tour two years ago, on which I got an indigestion in 1993 I set out to make a good and complete tour to the High Tatras. We took part three of us in this thin two weeks planned expedition: Zoltán Maráz and Rédei from Szolnok and me, from Budakalász. Based on the guys experiences we planned the tour for the middle of august. Zoltán Maráz, with whom I got acquainted in the tour in 1993, had already cycled 6 times to there and back the highest mountain-range of the Carpathians through the years, the other guy had only one. I had left 28000 kms behind me by bike in the last 5 years before 1995. We agreed to meet in Répáshuta in the Bükk mountain-range. For me it meant 200kms for the first day with the pack of about 20 kgs. At dawn of the 9th of August 1995 we started at the same time, at 5 am. It was dark. On the whole rainy and grey day I tried to get used to the 20 kgs heavy pack. After the tiring, hilly area before Eger I had to climb on a long ascent up to the 700m high Bükk-plateau, and after 200 kms I arrived at the Hunter-restaurant in Répáshuta, where my tourmates had already waited for me. 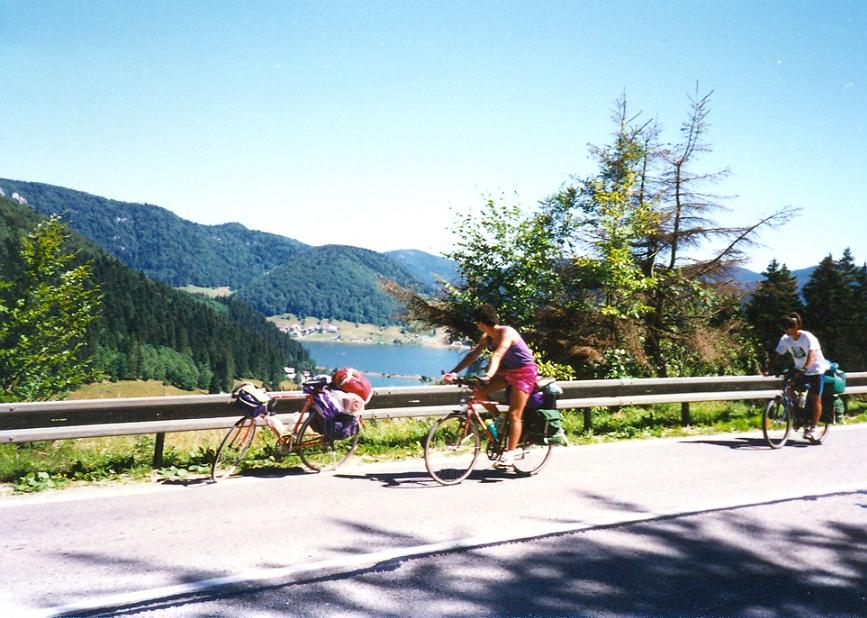 Next morning we left for Slovakia on a sunny, but windy weather. After Miskolc we left the third guy, who turned to the wrong direction. After an ahour failure searching we didn't drive us to despair, because we knew that in the everning we should meet each other in te fix accomodation in Roznava, where to we planned our night. We biked in the valleys of the Aggteleki mountain-range to the hungarian border, where we got a good news: our friend, Zoli was cycling a half an hour before us. In the first few slovakian villages I saw the hungarian and slovakian names of the villages together; it was pleassure. Towards Roznava we cycled between steep, karstic and rocky 300-500m high mountains against the habitual wind. We could build up our tents in the garden an acquaintance of my two cyclemates. 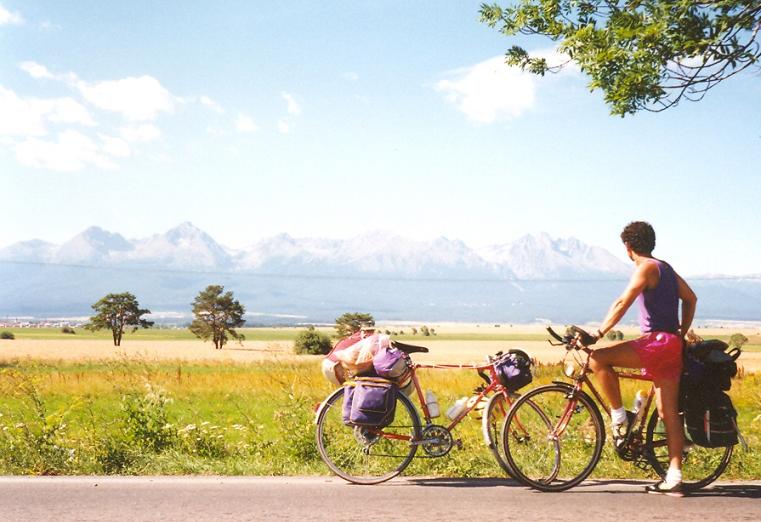 In the following morning three of us were starting our third day of cycling. On that day our plan was to climb up to the Lake Dedinky, that can be found between the Slovakian mountains. After leaving Roznava we began biking on a gently sloping ascent towards the mountains above 1000m heights. It could be a recommended road because of the nature scenery and the little traffic. We hardly met cars. During cycling we enjoyed very much the cold water of the built up springs. In the late afternoon we arrived at the shore of the swelled up Lake Dedinky situated in the valley of Hnilec. Because of the cold wind we lost our mood to bath ansd swim in the lake. Instead of the camping at the shore we chose the nice and calm place next to the neighbouring village, under fir trees and next to a stream. After warming ourselves by the fire we slipped into our sleeping-bags after putting some clothes on. 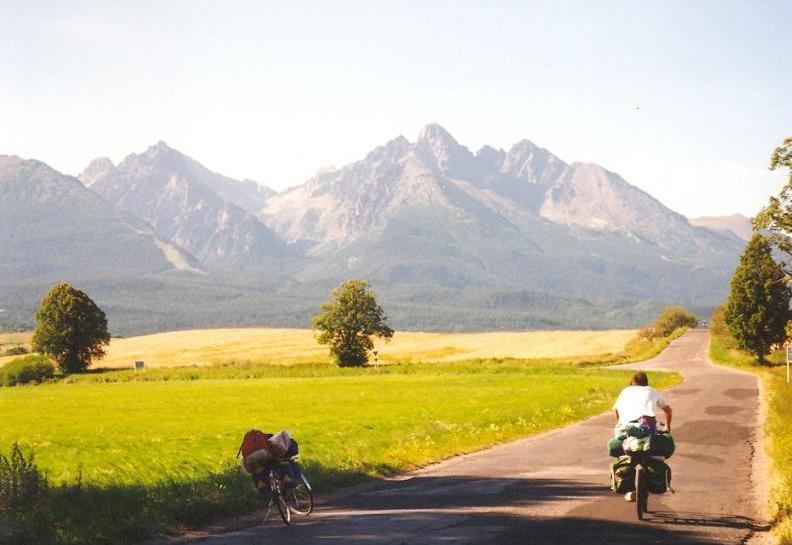 Because the broken shift of Zoli's cycle the following morning we had to start packing up early in the morning. On our first trip we went down to the bicyclemechanic of Dobsina. We was rolling down on the 7,5 km long descent we bypassed last day to the town Dobsina, that is famour for its icecave. After a successful shift-purchase and tackling we ascends up on the climb with a panoramic scenery in a good condition. On the top a white Opel Astra was waiting for us: the family of my cyclemate arrived to spend four days with us in the High Tatras. High rocks, and pleasant smelling fir trees followed us. After getting over a 2 km long, sometimes 12% steep ascent we arrived at the 1056m high pass of the Low-Tatras. After a speedy descent some kms before Poprad we get a fantastic view to the High Tatras. Towards Nova Lesna - where we had our accomotion for three nights - we was cycling on a gently sloping ascent while we also could enjoy the beautiful scenery. In this village 3 kms away from the largest holiday centers there are a lot of accomodations for the tourists. We had to pay only 150 Sk for every night.

On the following day we went on a hike into the High Tatras. We went up to Stary Smokovec by car, from where we travelled up to the heights of 1300m by cogway. Following a plaching stream climbed on the area full of fir trees and rocks. Coming closer to the middle station of the cable railway to the 2632m high top of Lomnic we met more and more dwarf fir trees instead of the high, nice fir frees. From that 11750m high point we got a beautiful view to the area behind Poprad, towards the Small Tatras. We could see i think minimum 50 kms away. It was as we sat on a plane. We had to pay 80 Sk for travelling by cable railway to a 1190m high saddle next to the top. From here we could see the 2632 m high top much closer. To see down we could see far areas: mountains, valleys. From the middle station, Encian we travelled with a cable railway with a cabin down to Tatralomnic. On the following day we drove to the cave of Dobsina in vain; it was Monday, so it was closed. To make a nice cycletour I took the advantage of the afternoon and cycled on the slopes of the High Tatras. 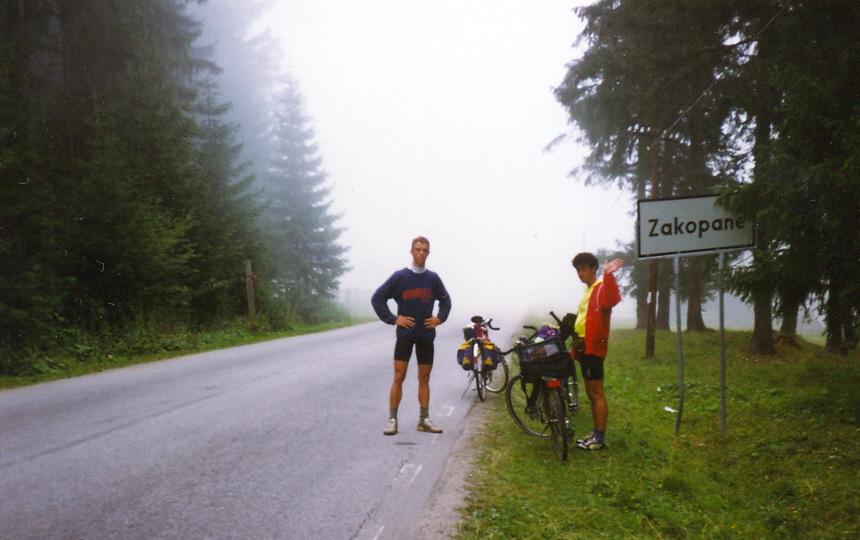 On Tuesday we planned to cycle to the polish Zakopane there and back. We left in a sunny, and nice morning. When we arrived at the polish border after 40kms cycling the clouds descended lower and lower. After a bend when we caught sight of the town-table of Zakopane between the trees, we got a surprise: the road disappeared in the clouds and the cars come from the frog with lighting hedlights. It started raining. After half an hour walking on the promenade it was a good idea to sit into a pizzeria to warm ourselves. It weas not only aan elegant pizzeria, but we could see every step of making a pizza, because it was made behind a glass screen. While we left back too late during cycling back to Slovakia, to Nova Lesna we had not too much time to have a rest, so was biking and biking in the cloudy and rainy weather. We had no hope for clearing up the sky. After arriving home ffirst we had to dry our clothes because on the following day we had go on cycling towards our home. In the morning clouds covered sky. in the 1010m high situated holiday resort, Stary Smokovec there was only 10 degrees centigrade. After saying goodbye to the others leaving to Hungary by car we cycled on a pleasantly sloping ascent to the highest point of our two week long tour, to the 1350 m high situated Lake Strbské. We couldn't enjoy the view of one of the most beautiful lake of the High Tatras because of the clouds. Here we spent the money we had left for souvenirs. Before the 30 km long, cold descent we had to put on almost all of our clothes. Leavaing the area of the Tatras the weather became a little bit warmer and cleaner. After biking around the hills surrounded and nice Lake Lipto we found a good and calm place for the tents in the Lupcanka valley, followed by fir trees and a plaching stream. We hardly met any car.


In the morning we started cycling in a little bit cloudy weather. We liked to spent that night next to Zvolen one day from the Hungarian border. Until the top of the first pass of the day we had to climb on a 3-4 km long very steep, but minimally trafficked road. From the saddle we enjoyed the fast and not too twisting descent. I reached the speed of 76 kms / h. 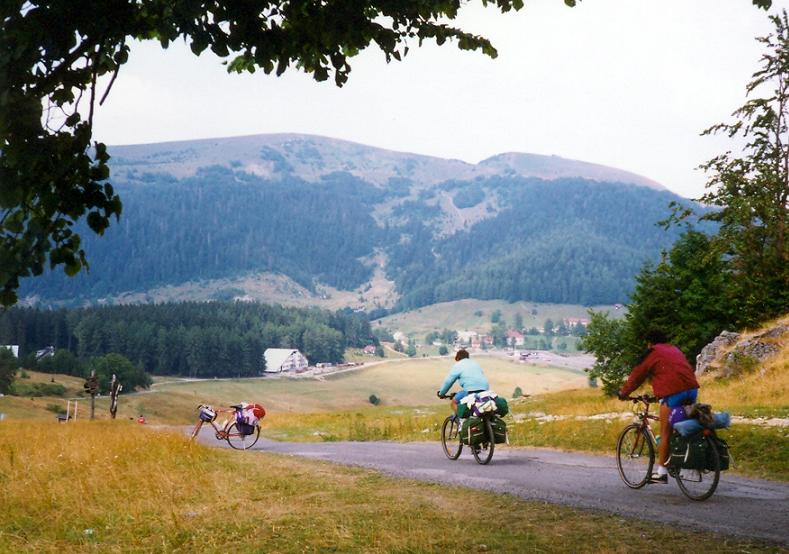 Our next ascent we began after turning left onto the main road towards Donovaly. Meeting with the lorries wasn't for our pleasure. We arrived at the 960m high situated skicenter, Donovaly in the early afternon. It was a watershed on the tour, from this pass we had to  roll to our home. At the start of the descent large tables warned the drivers to shift into lower gear. After the 24km long pleasant descent we arrived at Banska Bystrica. It was a surprise to see the nice, orderly main square with the fresh painted houses, flowers, fountain and tourists. It could be in Austria. We spent our night not far away from the shore of a lake near Zvolen. We bathed in the stream. On our last day in Slovaky we weren't curious to the mountains, so we preferred arrive to Hungary, than climbing on ascents. We bypassed long ascents, but towards Balassagyarmat we had to face with short but steep climbs. The tiring and steep descents and ascents changed each other so quickly, that we can hardly handle the gear-shift. Cycling on a forestroad at 4 pm we come out from the forest and get a view to the land of our country, Hungary. After crossing the border we hurtled through the bridge over the Ipoly. On the shore of the lake Nyirjes next to the town we wake up for a sunny morning. We started packing up early, because my friends from Szolnok had to cycle 160kms on that day. Almost the whole route to Aszód, in the valley of Galga was flat. We said goodbye to each other in Hatvan. The 15kms between the two towns were an extra route for me; I had time to arrive at home. Feeling the homesickness and the adventure and pleasure of the tour we agreed that we will repeat the tour in the next year.

Summing up the tour on this 11 day long cycling we went 1128 kms and 10200m height-difference. Five of the 10 nights we spent in a house. The cost for me was about 2500 Sk (SLK) and 3000 HUF. Because of the light trafficked but good shaped roads I can suggest to cycle into Slovakia.