As the winner of an article-writing competition in the Hungarian Bringa magazine, I could spend 11 days together with the Hungarian MTB squad in a training camp 80 kms from Athens, between 12 and 26 march 2002. We were in the friendly Hotel Bakos, in Loutraki, situated 3kms from the Korinthos channel and the Peloponnesus peninsula and at the foot of a 1300m high mountain. Although on ascents I prefer cycling looking around, taking pictures and making videofilms than cycling in a hurried style. So I was the odd one out from 24-26 head team. My goal was not to spend a good 11 days training, but to make nice cycle tours, enjoy the nature of Greece and to discover the north-east Peloponnesos. 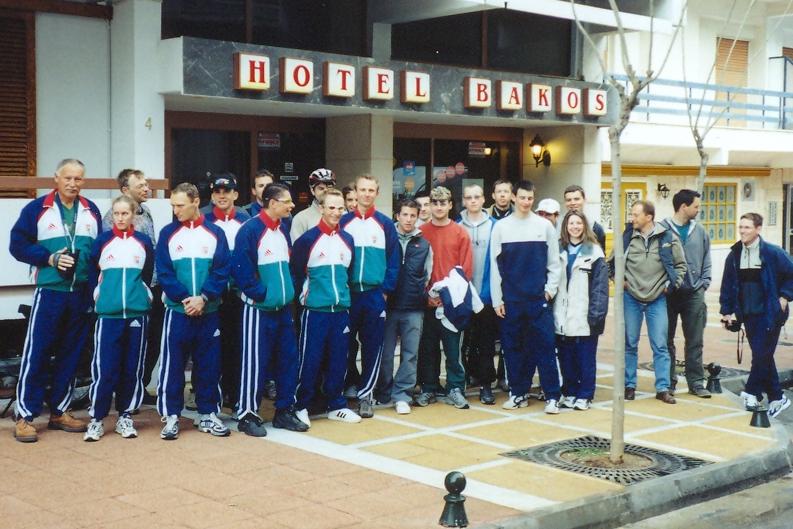 The journey by bus took 28-31 hours. At the Serbian / Bulgarian border we had to wait for one  one and a half hours. In the south part of Yugoslavia and in Bulgaria there was not too much highway, and there were many pot-holes in the road, we could only travel slowly and we couldnt sleep too much. The bicycles were brought by a small-bus .
In Loutraki we were accomodated in rooms of 2-3 beds in the Hotel Bakos, with B category. From the hotel we cauld walk to the beach on to the main-street or other shopping opportunities were in 2 minutes reach. In the main part of Greece, drinking from the tap is not recommended because of problems or the age of the water system, but Loutraki is famous for its mineral water, so we could fill our flasks full of water from the tap. Through out our tours we could buy mineral water at booths at every busy road. The 2 weeks of our holiday was characterised by the friendly 16-22 degrees temperature and  without one day exception  dry weather. This meant in a climate which is rich in vapour, that mainly at our morning start in 10 degrees centigrade (at ½ 9  9 am.) we could put on short cycling trousers and on our upper part we should put on maximum 2 jerseys, one with short sleeves and the other with long sleeves. Through the day on calm, sunny ascents we bathed in our sweat. Other speciality of the weather was the lack of calm weather; it was nearly almost windy. On two days we had to face strong, stormy winds. Its true that along the beach the wind is stronger, but on a tour of mine it occurred that on a 1500m high pass the wind almost blew me away. It was hard to make a short film, because the wind pushed so strong my arm and hand. I was happy with my wind stopper jersey.

The quality of the roads is almost as in Hungary (I think not about the roads in Budapest), so not so bad, but at crossing the rails I usually got from my bike and went through the crossing by foot, because the gap next to the rails wasnt filled so through cycling on it its bumpy. 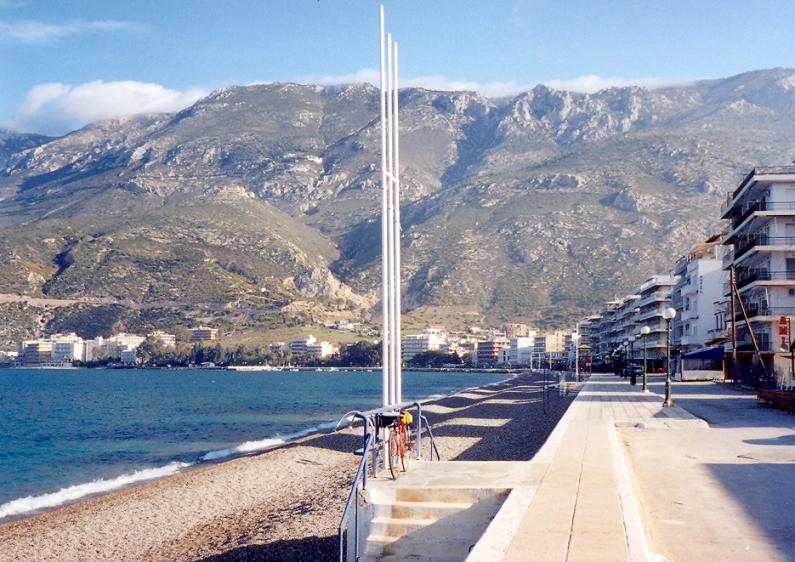 The traffic wasnt a problem anywhere, but in towns its worth looking out to the free driving style of Greece (southern born) people. In the mountains it occurred that I hadnt seen an auto for half an hour. Because Im used to the Hungarian traffic, at first thesound of horns was strange for me, but after a while I realised (found out, discovered) that I cycle regularly. After some occasions we realised that the cars welcome the cyclists with a horn . On small trafficked roads, on the traffic-tables the names of the villages, towns are shown only in Greek, using Greek letters. On middle trafficked roads you dont meet with this problem, because on the tables we can read the names, using Latin letters. The inhabitants  if they understood me  helped us with pleasure. Theoretically the shops are open from 8 am to 2 pm and from 17 pm to 20 pm, but in some places I found shops open through the afternoon. Maybe they didnt close in the afternoon because of the early spring. In the shops we could find everything, like in Hungary; the orange  because it is continuously becoming ripe  is definitely cheap. Nearly every monument-museum  in spring  are open until 3 pm, still the Acropolis of Athens. The entrance-ticket at the main museums is 4.4 EUR, elsewhere 1-2 EUR. About taking photos, I experienced that between 3.30pm and 5-6 pm the sun shines brightly, the sunshine gives more contrast; in this period can be made more beautiful pictures.

Tours with a start in Loutraki :

Loutraki is situated at the foot of a 1300m high mountain, at the Gulf of Korintos, and 78 km from Athens. The nice town is about 80-100 km away from the 1500-2400m high mountains, so it is an ideal starting point for both mountain-trainings and for plane, but windy tours. As my experiences show, the more important sightseeing can be obtained through a 150-170 km long cycle tour.

The two week in Greece gave me a lot of unforgettable pleasures. It was nice, I enjoyed to travel in the spring and to enjoy the mild weather. To discover unknown areas, to glance into the ancient Greek culture through ruins and museums. On our 29 hour long homeward travel we remembered the nice moments, tours, but we had some homesickness. I heard with curiosity the talk between some bikers and the leader of the MTB squad, the arguments about the competitions, about the system how to chose the man who will represent Hungary in Athens, about training methods, etc. These were things I have read only in newspapers, it was an other thing to hear the guys who represent Hungary in world-competitions. Arriving home from this unforgettable training camp, the federal captain said at last:  Next year with you, at the same place !