After long planning és some training I and a friend of mine (from the secondary school), Csaba Budavári started to "conquer" the Tatra by bicycle. We had already known the hungarian land next to our home: Vác, Penc, Acsa and the sunny, hilly area with sunflower-fields. In Verseg we spent a little time in a village-muzeum (skanzen) which consisted of only two old houses. The old lady who showed us the rooms was very friendly. Not much before Gyöngyös, after reaching the top of a climb we got a nice view to the town, and the mountains (the highest: Kékestető) behind it. In the evening it wasn’t a problem to fall aslep; we were tired.
In the second day our destination was Aggtelek, a village which is famous for its cave. On the slopes of the Matra mountain-range we had views to the land towards the Great Plane and in front of it the smoke from the chimneys of the Gagarin power plant. After Verpelét we said goodbye to the Matra from a top of an ascent: "Hello Matra, the mountains which wait for us is: Tatra." In the old center of Eger - which is famous for its fight against the Turks - we spent a pleasant hour. After leaving the houses of the town we was pushing the pedals up to the plateau of the Bükk mountain range. On the plateau we cycled on forest-roads without any traffic. It was very nice and pleasant: the vegetation: between junipers, fir trees, flowers and some rocks, small meadows. At a moment an eagle flied up from a meadow. That was the Bükk National Park. We took a little lay-by to the waterfalls of the Szalajka valley. (it is also known because of the horses there). We went on cycling along the Lázbérci storage lake and then we crossed the main road between Miskolc and the slovakian border. In this area we didn’t have any bike-experiences. From Felsőnyárád - a village after crossing the river Sajó - we was pushing the pedals in sunset. Sometimes some dogs - without any owner - made us bicycle faster. After 165 km we arrived at the camp of Aggtelek at 8.30 pm. After shower we could hardly choose from the meals in the restaurant, because there was a few left. (In 1993 !)
Next morning we went on a short hike to the rocky Baradla hill, after it and eating a water-melone we crossed the slovakian border. After the border the land didn’t changed; it was hilly and karstic, not much before Plesivec there was a difficult 12% steep climb. Between Plesivec and Roznava we was biking in a flat valley with steep 5-600m high mountains each side. From Roznava towards the town Dobsina - which is famous for its icecave - the road was sometimes flat or gently sloping. The mountains were higher and higher. The serpentine road started after the town. We enjoyed very much the land, the ascent, because of the fir trees, the view and because we were on a true mountain-ascent. From the 870m high top we rolled down to the 2km far situated Lake Dedinky, where there was busy swim- and bath-life. The lake is surrounded by fir tree forests, somewhere we could see rocks and at the end of the lake there is a little, nice village. It’s a nice place. We hadn’t reserved room only for that night of the tour, so I had to search a room where to sleep. While searching accomodation I hear hungarian words. A young hungarian pair of biketourists had already arrived there. They (Zoltán Maráz and Nagy) were 27 year old, came from Szolnok (Hungary) and that was their - maybe - fourth Tatra-biketour. Because we couldn’t find a room, they offered us to sleep in a tent of them. We set up our tents behind the next village at 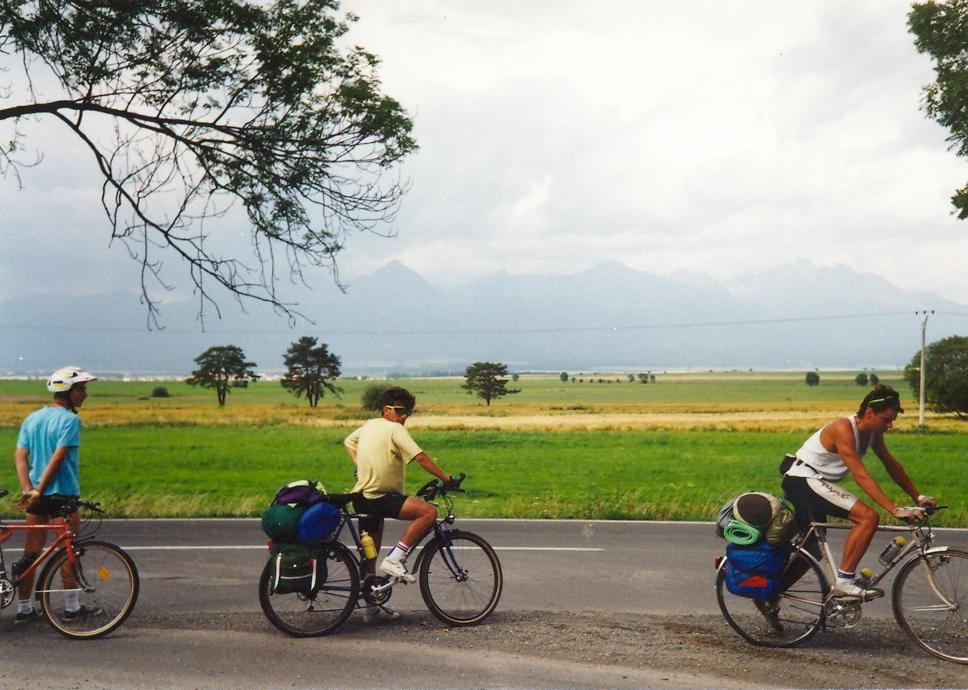 the edge of the fir tree forest onto a soft peat. In the evening we made fire to toast bacon. It was a nice evening: we enjoyed the lights of the glowing embers and the voices of the stream from the next. During the talk we heard interesting and funny stories about their tours in Slovakia. That was my first night in a tent, and I liked it.
We woke up for birdvoices in a cloudy morning. We climbed the short ascent next to the lake in rain. On the top we were waiting under the roof of a house which was for saving the people from the rain. Looking at the land towards Dobsina we could see that the clouds from west are thinner and there was some sunshine there. Reaching the valley towards Stratena we made a short detour into a canyon : the thin, not used road went to between high rockwalls and along the bank of a stream. From the icecave Dobsina (although the town is 15-20 kms backwards.) the road ascended gently through the Slovensky Raj. At a roadcross we get views to the mountains of the Lower Tatra. We climbed the 10% steep and 1056m high "Doghill" - that got its name from the two guys from Szolnok - with cycling through a nice and calm fir tree forest and with some flowers next to the road. We had a rest on the top then on the descent we were rolling downwards to the plain of Poprad. Before climbing the last small hillrow before Poprad we got a beautiful view to the peaks of the High Tatra above the hill. A few kilometers before Poprad, when we came out from the forest we got a unforgettable panoramic view to the whole High Tatra. As the guide told us: the mountains ascend towards to the sky from the plain very steep and without any transition. Dark clouds were coming from west. 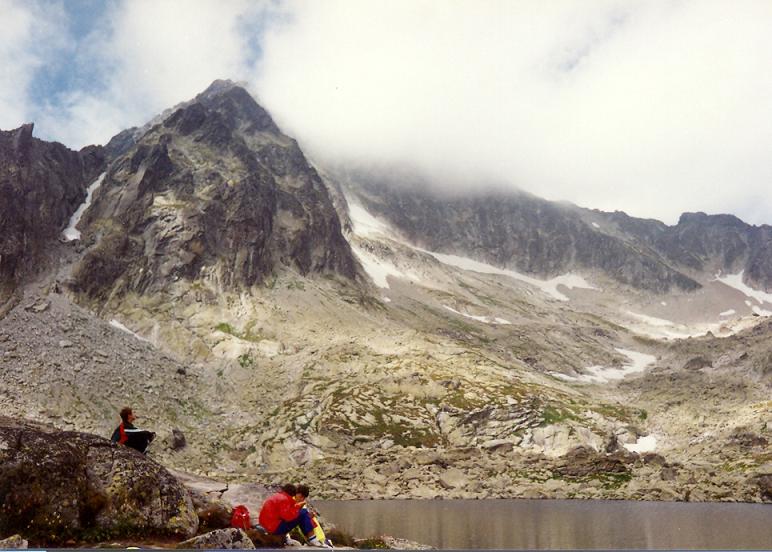 We spent the time of the short rain in a confectioner’s. We bicycled towards Stary Smokovec in the beginning on a pleasant, then on a 12% steep ascent. We wanted to sleep in a camp. (the price for a wooden house for 6 people costed 1000 Sk). At the end we spent the night in a private house in Huncovce. We paid 400 Sk for a night for four person. From the edge of the village we had also nice view to the mountains.
In the morning we travelled to Stary Smokovec. Walking to the funicular railway station we got a view to the top of the 2632 m high Lomnic peak, that had just "come out" from between the clouds. After travelling by the also cheap funicular we hiked towards the Tarpatak waterfalls. After we took delight in it, we went on towards the 2015 m high situated Tery tourist hostel. It had got its name from the hungarian Ödön Téry. On the path we met with fir trees and mini fir trees. Halfway to the hostel we got the view to a high waterfall and to the tourist hostel above it. We arrived there at noon. There are five lakes next to it. We ate our sandwiches on the shore of the lakes in jackets. We warmed ourselves with hot tea in the hostel. 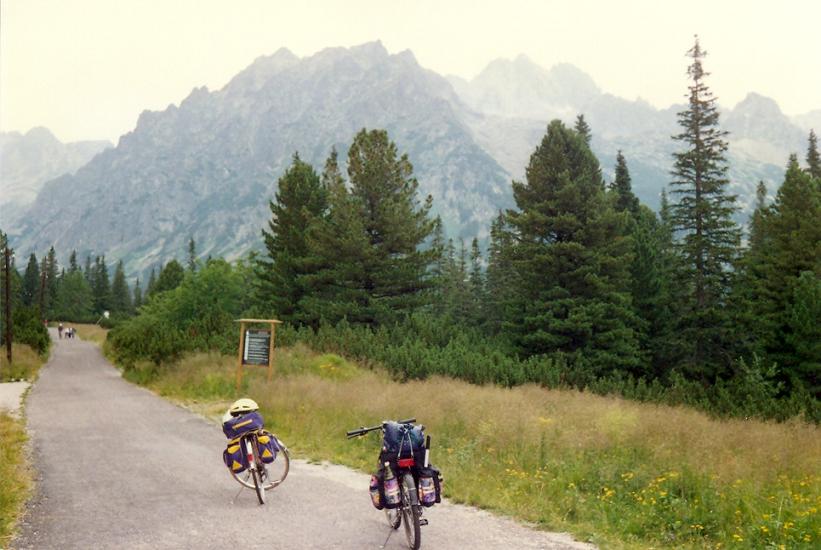 Because of the cold air that remained between the high mountains, rockwalls we could see our breath. We continued the tour towards the 2352m high Priecne saddle. After rounding a "hill" we found ourselves at the feet of a very steep rocky section, where the path was made safe by chains which were fixed to the rocks. On the other side the path was full of stones, and somewhere crumbling. After the steep section downwards we were walking on grassy or stony path next to small lakes. We arrived at the Zbojnická tourist hostel at 4 pm. After a short rest we had to continue the trip. On the path towards Smokovec we met with strong carrier who were paid for carry about 40-50 kg things (foods, drinks, plates, bed-clothes) to the tourist hostel that it needed. From Stary Smokovec (where we arrived in dark) we travelled to Tatralomnic by bus, where we had lunch. After arriving at home it was good to "fall" into the bed and take off our boots.
After we slept enough we said good bye to the boys (they went to Poland) and bicycled towards the Lake Strbské and than the 1494m high situated Lake Popradské, where rooms were reserved for us. To Tatralomnic the road was light. The road on lower slopes of the High Tatra - named "Magistrale" - does a connection between the polish border and Liptovsky Hradok. Between them it went through tourist centers 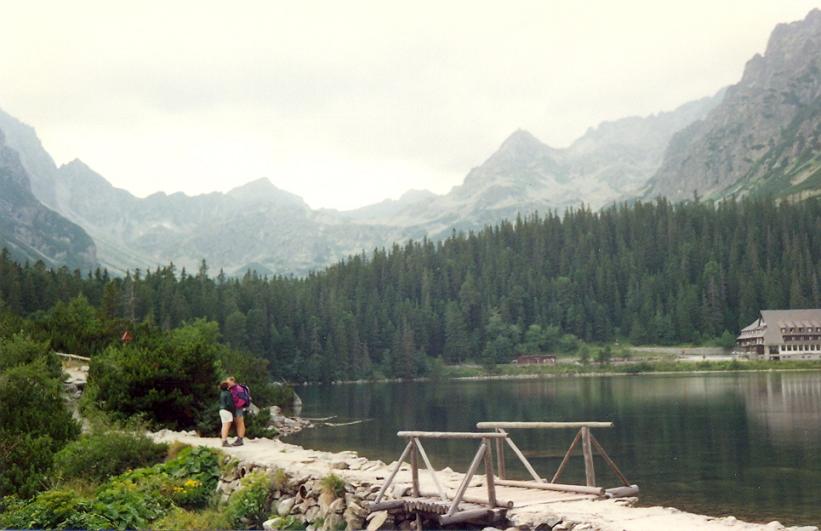 like Zdiar, Tatranská Lomnica, Stary Smokovec, Vysné Hagy, Strbské Pleso… After Stary Smokovec the road ascended continuously. We were cycling through fir tree forests, we had only a few view to the rocky tops of the mountains. In a parking place of the Lake Strbské we saw a deer that came out from the forest. From the Strbské lake the road was closed from the cars, so we could enjoy it very much, although it was 18% steep somewhere.
We arrived at the tourists hostel at 4.10 pm. We hadn’t bicycle up to a so high (1494m) place before. For the evening we fell sick. Last day we drank from the water of the mountain lake so we get a stomach upset. We began to feel that the hike to the 2499m high Rysy - that we planned for nex day and waited so much - would be cancelled.
The night was bad, and our shape didn’t changed, so - as we had spoken at home - we called our parents to take us home by car. In the evening we was rolling down carefully to the shore of the Strbské lake. We were sad about our plans that we couldn’t fulfil. We arrived at the parking place after 500,3 km (during 7 days) cycling. Unfortunatelly the homeward travel (by car) was much faster and less interesting than we had planned it by bike.