Györgyi Gábor: Bicycling in the Alps - collecting the paved alpine roads above 2000m

Bicycling in the Alps - collecting the paved alpine roads above 2000m 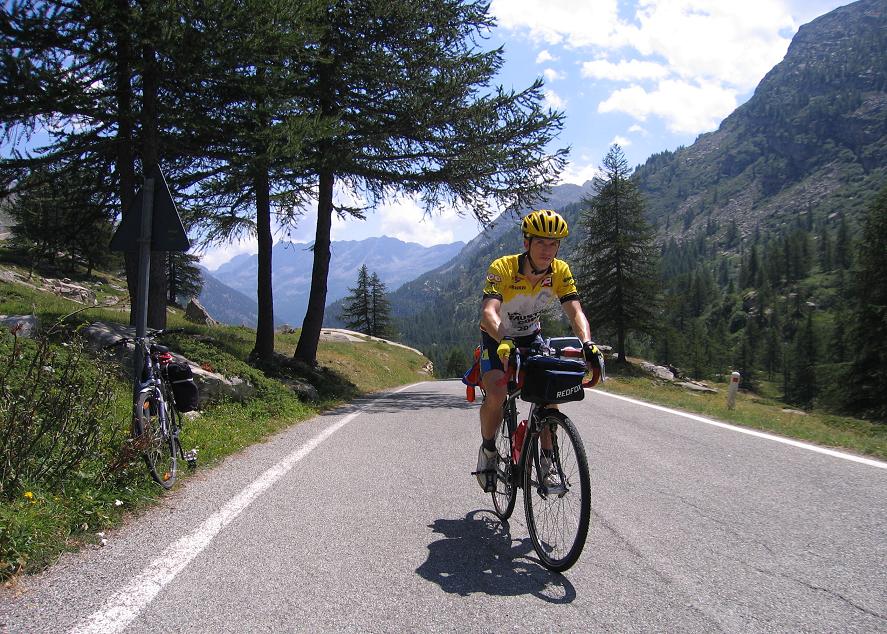 For this summer I planned to finish collcting all of the asphalted cols above 2000m int he Alps. For years I cycled alone on my summer tour, buti n 2006 we were 2-3 of us. In the following I will write about the memorable moments, cols of the tour. 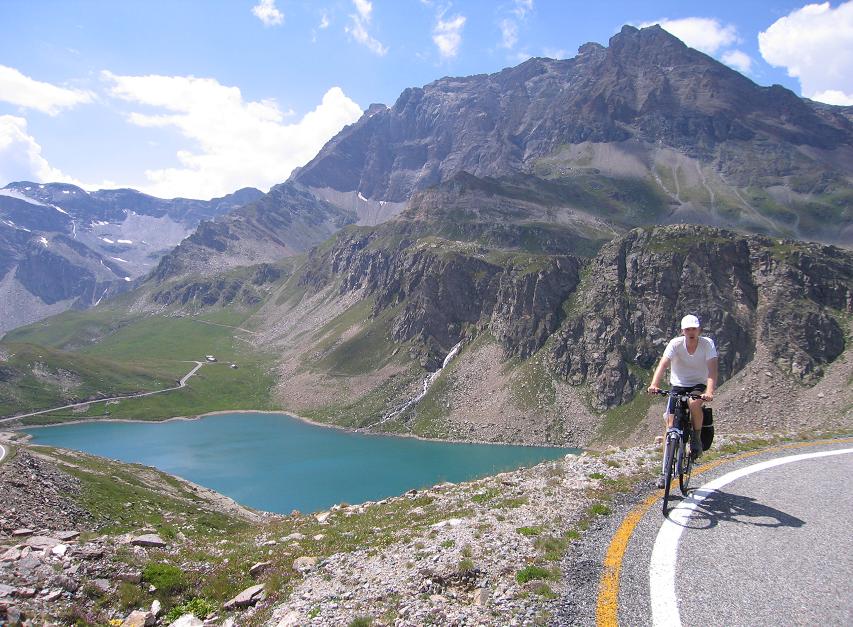 Ont he second day we woke up for a sunny day: ideal for climbing Colle Nivolet from 400m to 2612 m of height. In 2005 I cycled there but could start only int he middle of the afternoon, so I had to turn back at 9 pm (at 2000m). In 2006 we had no problems. I was waiting for the time to go above that point, where I had to turn back last year. The lower section is not so interesting to Noasca (1015 m).
After it we had to face with 10-8% steepness, 3 kms in a tunnel. Coming out of it and cycling a few kilometers flat and little bit up we go along a nice lake. Here, the air is fresh and the countryside is as it should be at high mountains. After 2 kms flat section, the last hard kilometers start, while we can see less and less trees. At 1900m the road starts twisting and the straight sections are shorter: it's a very nice serpentine in the Alps, with beautiful view to the valley and mountains. The next lake at 2200m is grey. 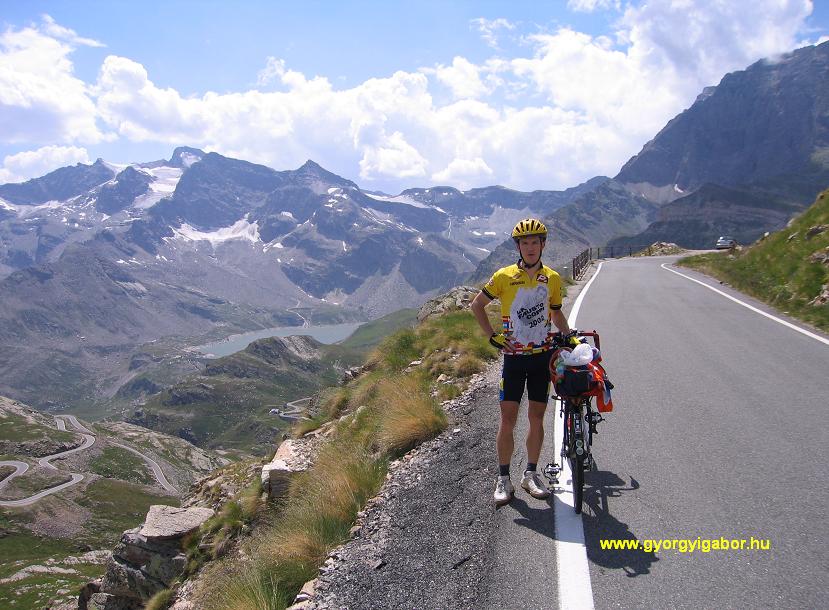 After 2kms we arrived at a clear and blue lake, where my friend spent 5 minutes of bathing for a joke; it wasn't cold. From the other side of the lake, 50 m-s higher a wonderful panorama we could see: the lake, the mountains around with snow on them. 4 kms after it, just before the col I think we got maybe the best alpine panorama during my cycling "carreer": down the two lakes, the twisting road on the mountainside and the snowy peaks, plus blue sky and sunshine.
I reccommend it for everything! Don't miss it! 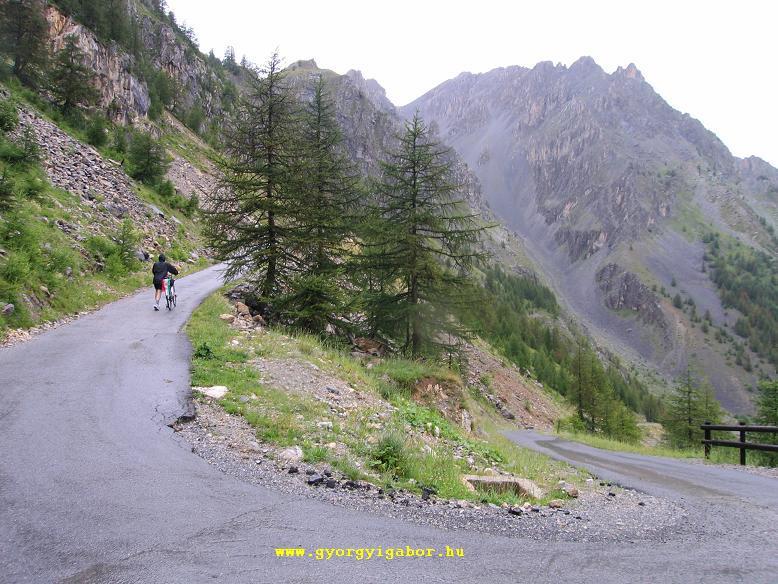 After a little bit of travelling and cycling int he night, next day we had to climb the almost unknows 2083m high Colle del Preit. I was curious about it. On the internet I had only 8-10 matches about it, I could hardly controll if the road is asphalted. I thought that after conquering it with my photos and infos I could give infos to others to get acquainted with it. WE arrived to the bottom of the climb after 3 short rain, and 1 kms climbing we were pushing the pedals again in rain with thunderstorms. For 5kms it was ca. 9-10% steep, sometimes is hort, thin tunnels.
Turning right we left the road which went to Colle Sampeyre. Before Preit village we stopped to put off a clothes not to sweat too much clothes. As I was serious to climb all of the asphalted alpine passes above 2000m, I wasn't sure, it Peter really wanted to come with me, but he could bear with that circumstances, than me, but I had strong willingness. Although we heard the tunderstorms it wasn't just above us. 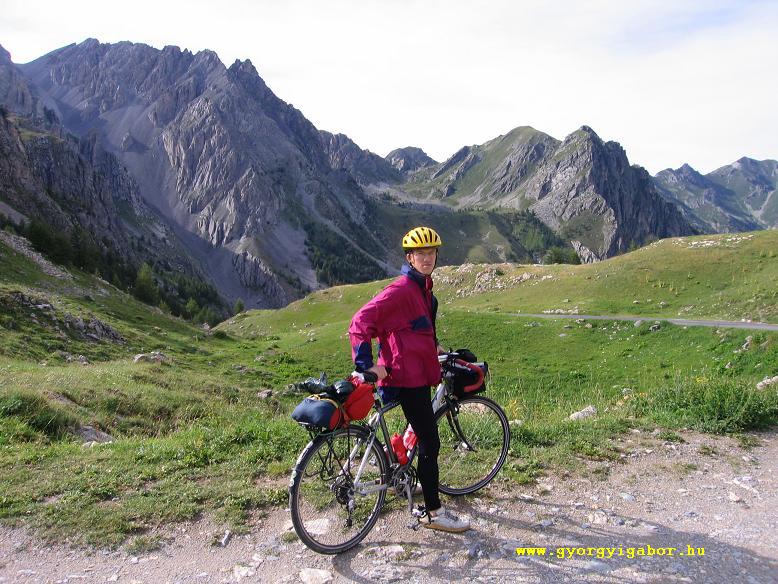 After 1kms after Preit (1540 m) the road went out of the forest and became 10% steep. At 1700m sometimes I felt, my fingers started to feel the cold. When we arrived to the level of 1800m the rained stopped lightly and the steepness became 14-16%. Peter decided it's best to push his bike, because he was hardly slower than me who wanted to cycle in any case. I slowed until 5,4 km/h. The views backwards were nice; at the top we could see thin sunshine. At the cold there is Meija tourist house (??), where I was invited by Peter to siti n and get warm into our bodies. It was a good decision. When we left the col, the rain went away and we could enjoy the late afternoon in light sunshine. For the downhill we had to put on our warm clothes.
It was a hard, but friendly climb with hardly any traffic. 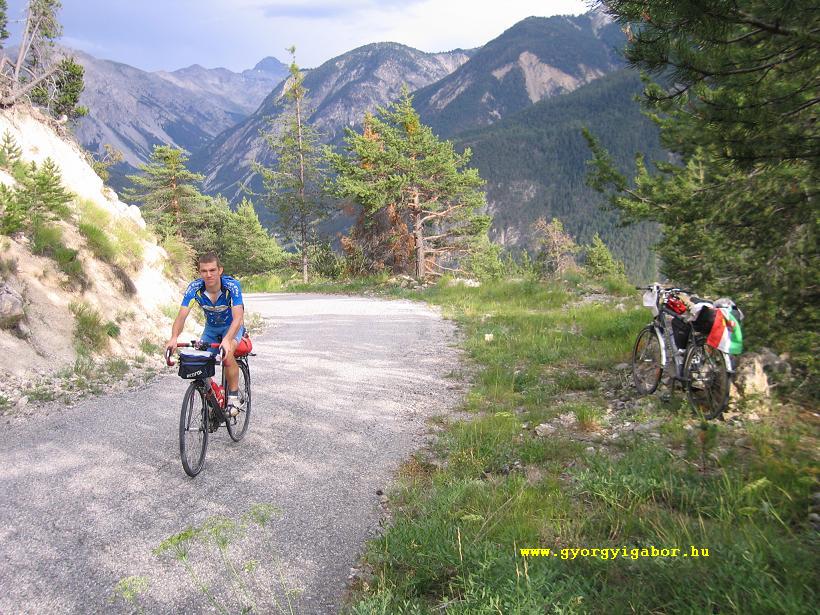 On our 4th day afternoon we arrived to Briancon, from where we started to climb the other low-trafficked ex-military road to Col du Fort Gondrans (2347 m), the col which gave us unforgettable memories. The road is mainly 8% steep, only maybe 3kms long ca. 5%. It went to the level of 2000m in the forrest, but few times there were views to the mountains or towards Briancon or the Izoard valey.
At 1759 m high there is a hairpin with nice panorama. There was a section where the road went on a steep mountainside with moraine, and there was no barrier at the edge of the road. At ca. 1850m high there was a barrier across the road, but the sign was french. We thought that we shouldn't go on cycling up, but we were curious and wanted to know if the reason not to go on is serious or not. There were small stones and rocks on the road: they covered the road 10-50 cm high, but it was only 100m long, where we couldn't cycle. 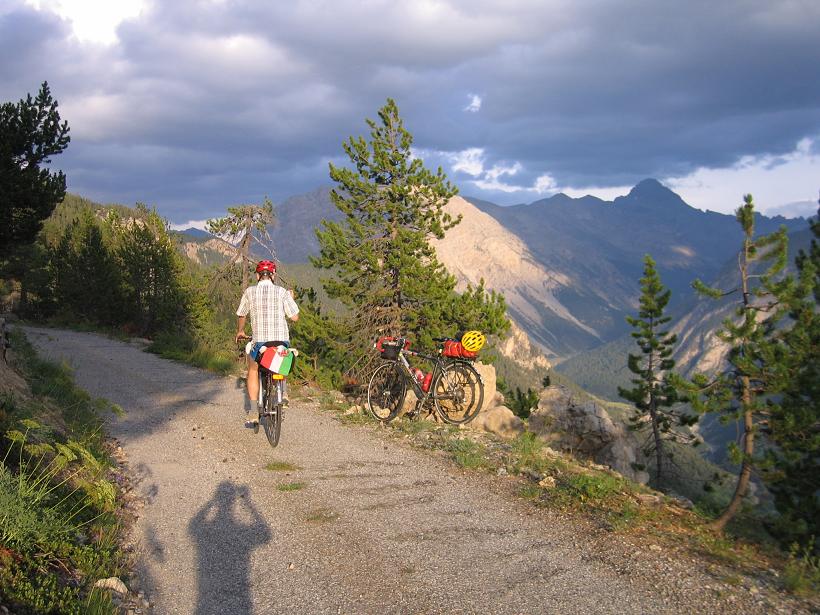 After a minutes prestige race that I won, we arrived at the col just before sunset. There was a castle, ruin at the top of a hill, and opposite, on an other mountaintop an another. At a table I found there a matrices of the Club des 100 cols. 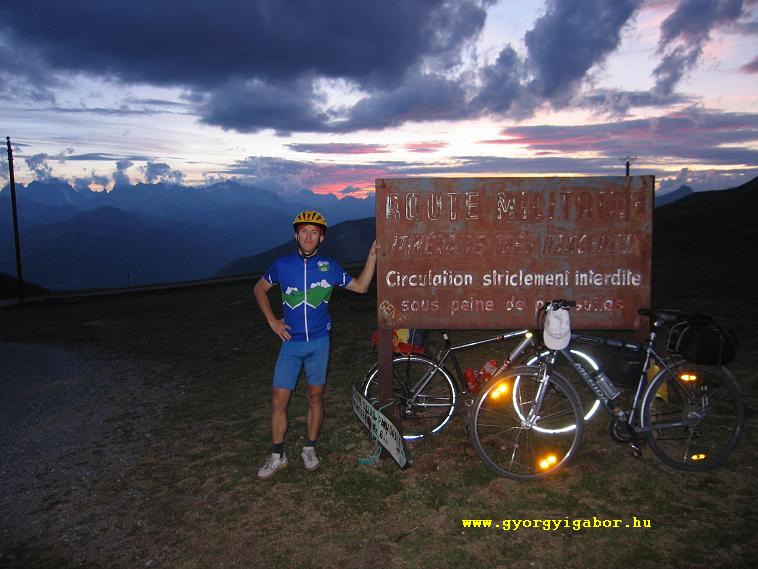 The slope down was very dangerous, because we started it almost in darkness, and my front-light was very poor. In the forest Peter had to help me: we cycled just beind each other, so I could enjoy the light of his lamp.

After a rainy and cold day we woke up for a cold swiss weather in Conthey. Because we didn't want to siti n the hotel, we decided to put on warm clothes and climb Col du Sanetsch. It's first ca. 8 kms went on the warm feeling, partly sunny mountainside full of wine-plants, then in a steep rocky valley. At the end of the forrest the road turned few times and from time to time Iwe reached the level of the clouds. Before a tunnel we saw that our road turned left, towards the grey clouds, where we afriad of any rain. 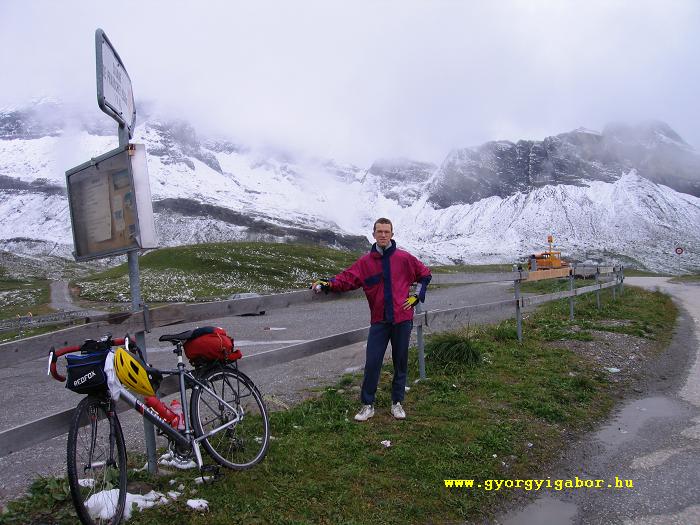 In the last 2-3kms it started to rain and there was wind, so I had to put on more warm clothes. Along the last km I was surprised because we could see a little bit of the fresh snow from the night.

Next day I climbed to 2048m high Moosalp from Visp, which I could recommend very much: it is steep, but the traffic is low, and the rarely views are beautiful, mainly the upper section, above Bürchen village. 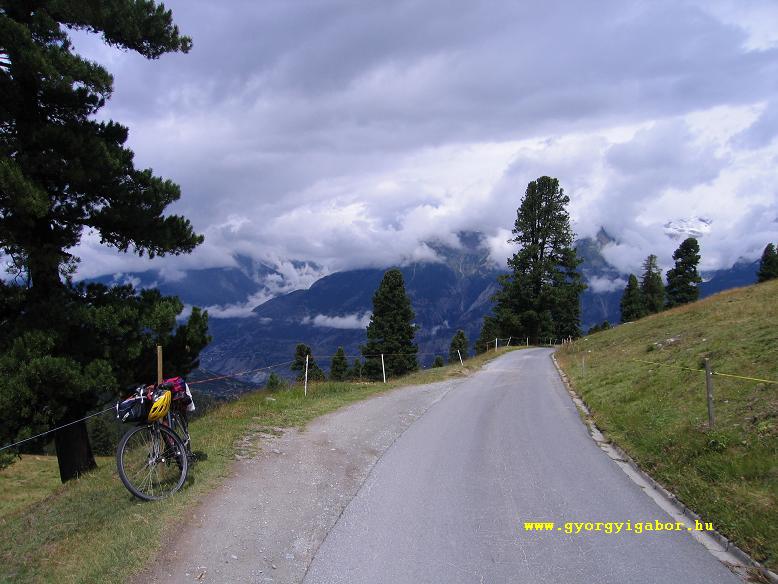 Next day we had rainy day again. Sometimes we hoped changing, but it was in vain. At last Peter was so determined, that I decided to climb 2224 m high Sustenpass to. Because during the climbs in cold weather he stops much less than me, I started 1 hours before him, and after 10 minutes bicycling the weather didn't got better, but worse, it rained again. 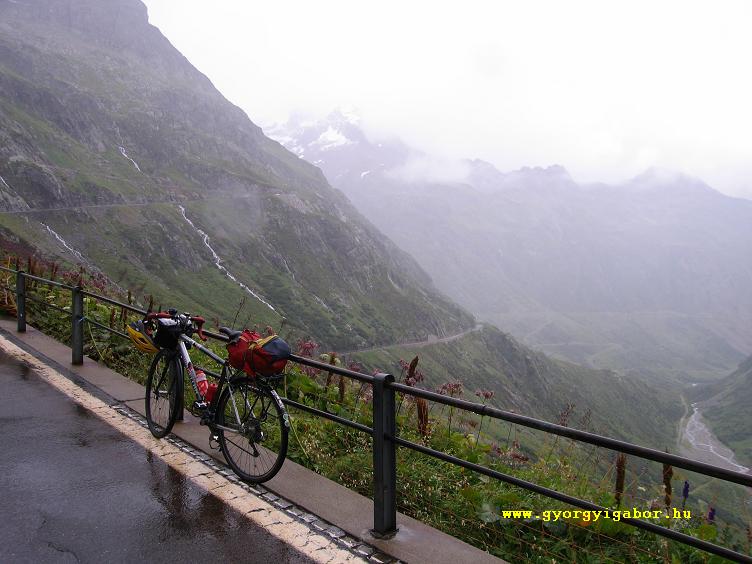 As I read Sustenpass is a very bautiful slope, but I had to climb it between clouds, cold and frog, rain. I stopped first time after ca 8 kms: as I was eating some light I saw the clouds flying in front of the opposite mountains. Before the last 5 kms I could saw that final kilometers with serpentine in the frog and rain. It was a feeling to cycle ont he steep mountinaside with 200m of distance for looking. At the top I had to put on my clothes in time, it was ca. 4-5 defrees Celsius. It was a good idea to put my rucksack from the bicycle ontom y back to warm my body. Peter followed my little bit more than an hour; I bowed him during downhilling. 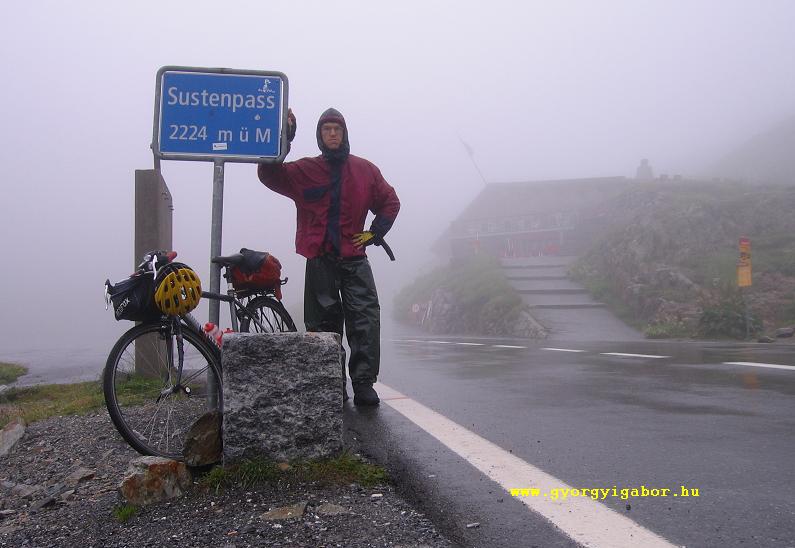 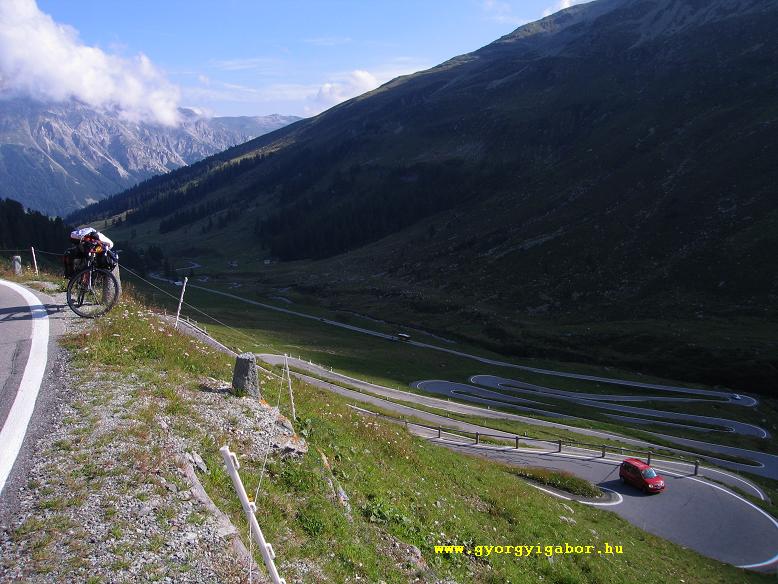 Two days after this adventure at last we woke up for sunshine not far from the italian border, in Splugen. We planned a hard day. The village Splugen was very nice with the mountains, flowers and blue sky, and the hairpin-bends to the pass too. I saw them on a photo; they were fantastic. First after 1 km: 6-8 hairpin-bends and the straight sections followed each other just next the previous. After a middle section in shadow the last 2 kms were also full of septentines, but there was a lot of views to the road, to the mountains. The interesting part of the italian side was, where the road turn just next to the previous, so tight, than almost there was no place for a whole curve. (see pic) 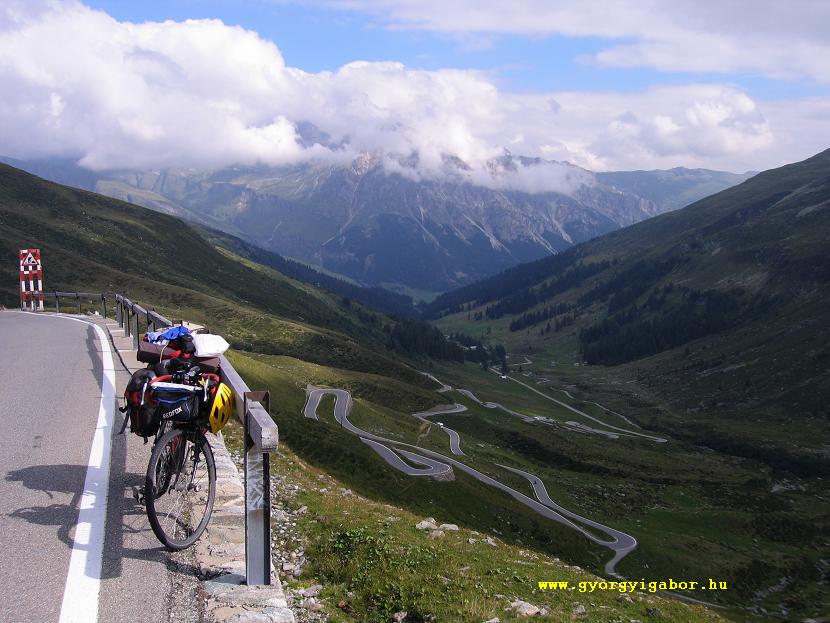 Because Peter has more then half hour to repair his bicycle and couldn't reach me to the pass, I couldn't wait him, because I had to climb Mortirolo in the evening. I thought, he would reach me, but he couldn't. I was very fast and racy / dashing on the main road towards Bormio, and he didn't like the roads with high traffic, so he choose little roads. The Aprica pass from Tresenda was mainly boring in the forrest, 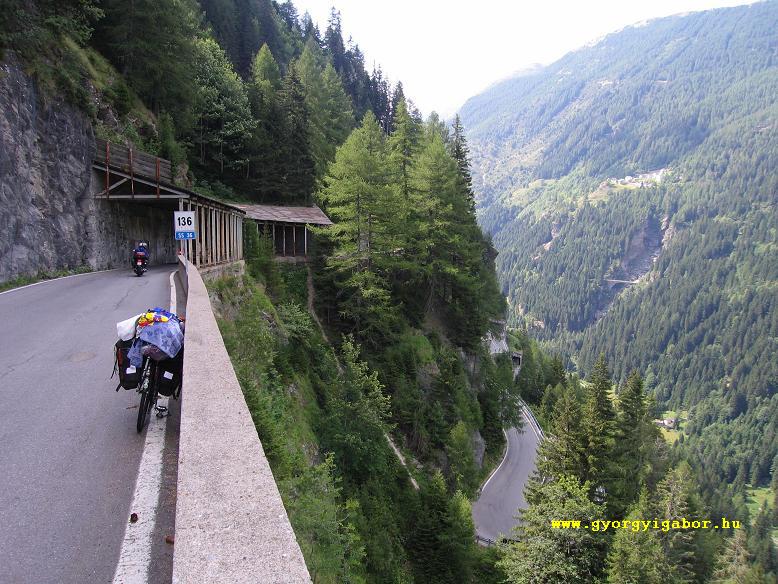 but in the last 3-4 kms I reached a mittle aged man on a little racer and I followed and overtook them. After arriving at Edolo, I got the sms from Peter, that - partly because of getting lost - he is behind me minimum 2,5 hours, so I leaved to Mortirolo and Passo Col Carette di Val BIghera alone.
First I wasn't a good thing to start at 8 pm, but after a short thinking, I filled in my optimism: "In 2005 at brevet 300 or brevet 400 from Wien to Wien I cycled through the whole night in dark with 2 of my friends. It isn't so serious! On the 8-10% steep climb first I crossed the village.., then I remained alone in the forest. 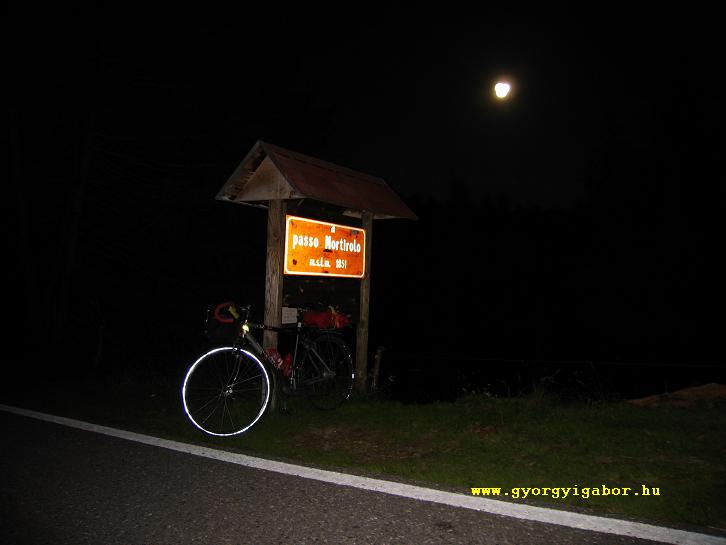 With a good light on the front of the bike I enjoyed the calmness, the nature alone and the way I felt my strenght, my muscles. After at 1600m partly I could looked out from the forest to the mountains, to the countryside, 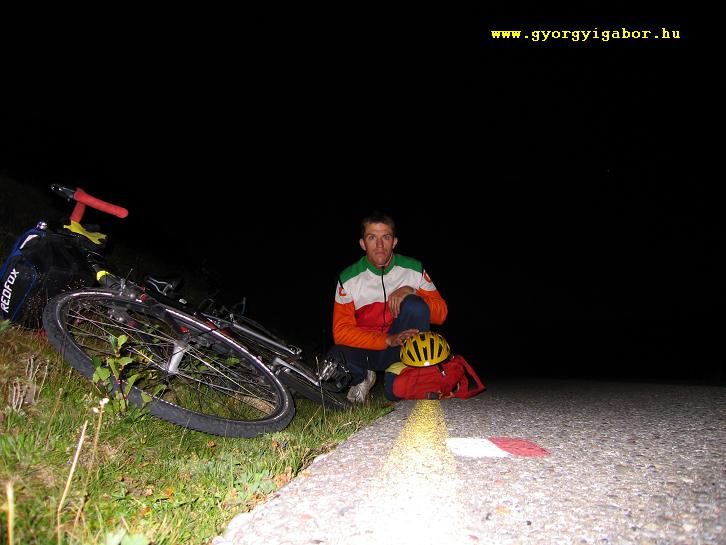 I was surpriosed, as I could saw my shadow, but it wasn't a car, but the Moon was shining so serious. I was superb! I didn't have to use my light. I could see the nature without a light. The weather was good too. On the pass I was amazed: there were a lot of paintings ont he road and there was a wooden pillar with matrices on it and with the hero Pantani. With the panorama and the signs on the road I almost felt the feeling of the Giro d'Italia in May.
After photo making, I rolled down a few hundred meters back and then turned to left towards the Col di Carette Val BIghera pass. The first km was almost flat, but after it 1-2 kms very hard and steep climb in a forest. Because it is a little road, at the time when a bird scarred me, I felt a little bit afraid, but after not. After midnight I saw peaceful cows graze/pasture there. The last 2 kms went on a meadow; I could see with my own eyes the mountains, the countyside, etc. 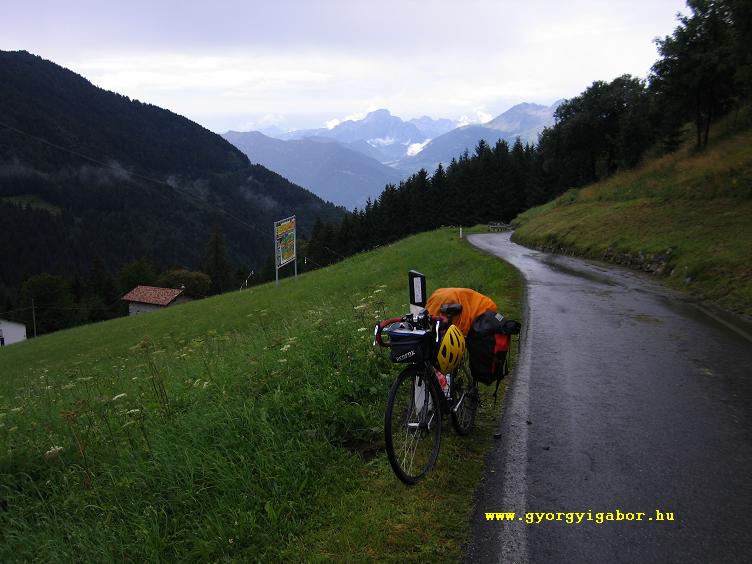 There was no sign for the pass, but I stopped at the top, and made photos about me. The air wasn't cold, although it was above 2000m and it was 1 am. Without any problem I rolled down to Edolo, and spelt at helf past 2 am.

For our last day the Passo Croce Domini and Giogo di Bala remained to climb. They are at the edge of the Alps, and I think not too much bicycler know it. Unfortunately we got rain after 5-6 kms, so I stopped to wait, while Peter went on biking up. After 1,5 hours I decided to cycle too and at 1500m high I could go out of the rain. 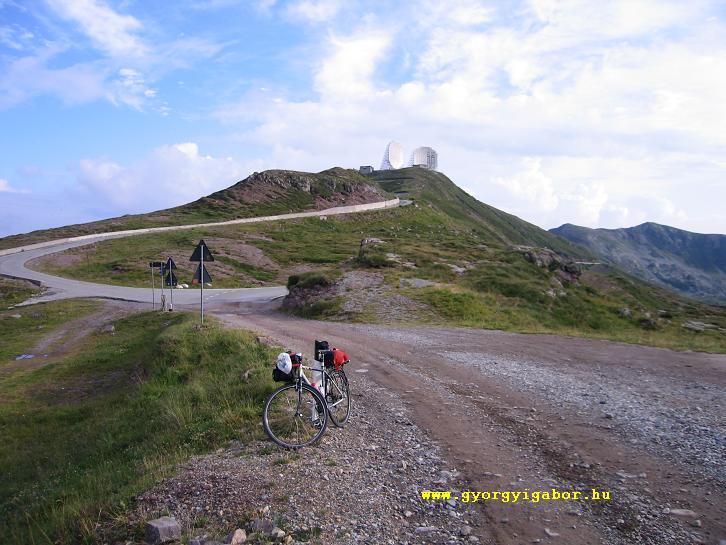 The climb is very hard, with 7-10%. The nature is a little bit else than at other alpine places....
The slope towards lago Idro was very poor! 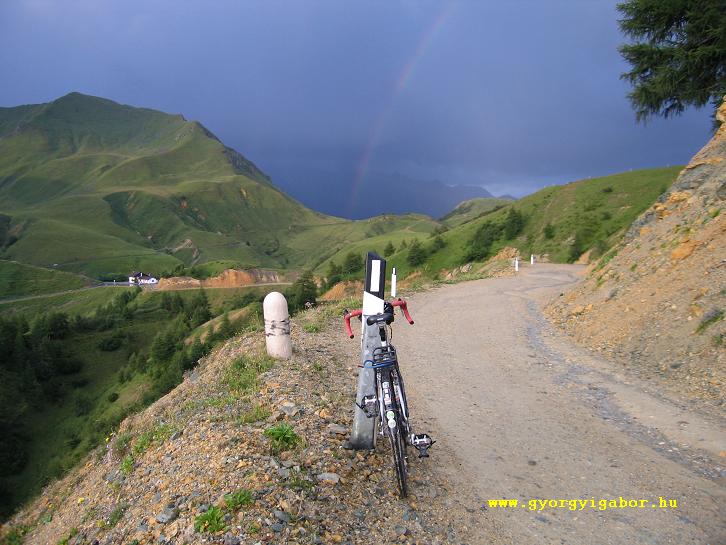